India is the 3rd largest fish producing and 2nd largest aquaculture nation in the world after China. The Blue Revolution in India demonstrated importance of Fisheries and Aquaculture sector. The sector is considered as a sunrise sector and is poised to play a significant role in the Indian economy in near future. In the recent past, Indian fisheries has witnessed a paradigm shift from marine dominated fisheries to inland fisheries, with the latter emerging as a major contributor of fish production from 36% in the mid-1980 to 70% in the recent past. Within inland fisheries, a shift from capture to culture-based fisheries has paved the way for sustained blue economy.

Although inland fisheries and aquaculture have grown in absolute terms, the development in terms of its potential is yet to be realized. The unutilized and underutilized vast and varied resources, in the form of 191,024 km of rivers and canals, 1.2 million Ha of floodplain lakes, 2.36 million Ha of ponds and tanks, 3.54 million Ha of reservoirs and 1.24 million Ha of brackish water resources offer great opportunities for enhanced production along with livelihood development and ushering economic prosperity.

Recognizing the importance and potential of the fisheries sector, the Government of India approved the flagship scheme, Pradhan Mantri Matsya Sampada Yojana (PMMSY), in May 2020 under the Aatmanirbhar Bharat COVID-19 relief package with a vision to bring about Blue Revolution through sustainable and responsible development of fisheries sector. The figure below details out the estimated investment under PMMSY: 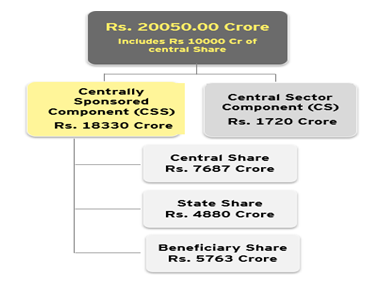 PMMSY marks the highest ever investment in the fisheries sector, to be implemented over a period of five years from FY 2020-21 to FY 2024-25 in all States/Union Territories in order to drive the sustainable and responsible development of the Fisheries sector while ensuring socio-economic development of the fishers, fish farmers and fish workers. PMMSY was thus launched by the Hon’ble Prime Minister on 10th September 2020.

In an endeavor to consolidate the Fisheries’ sectoral gains and boost economic growth, PMMSY sets out ambitious goals for FY 2025 which include additional fish production by 70 lakh MT increasing aquaculture productivity from the current national average of 3 tons to 5 tons per Ha, doubling exports from Rs. 46,589 crores to Rs. 1,00,000 crores, generating 55 lakh additional employment opportunities and doubling fishers and fish farmers’ incomes.

The Department of Fisheries is thus committed towards holistic development of fisheries and aquaculture resources by developing, managing, conserving and getting its resources responsibly utilized for improving livelihoods, generating employment, food and nutrition security, economic prosperity and wellbeing through appropriate strategies, stakeholders’ participation, public, private and community partnership, market support, and strengthening research, extension, convergence and their linkages. 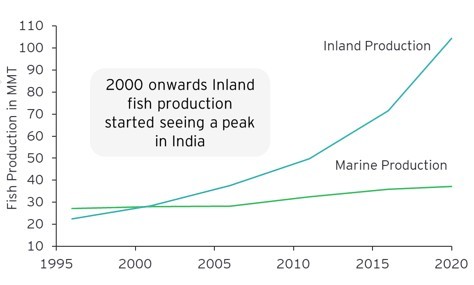 India has around 2.36 million Ha of Tanks & Ponds area where culture-based fishery is predominant and contributes to the maximum share in total fish production. The current production from tanks and pond is 8.5 million MT. As a major contributor towards production, the Department has prioritized to expand the horizontal area under tanks and ponds to achieve a target production of 13.5 million MT.

In view of that, the Department has sanctioned proposals from different states to provide necessary impetus for leveraging innovative technologies. Accordingly, below sanctions have been made under PMMSY with the total project cost Rs 36,031.70 Lakhs :

It is estimated that to achieve the goal of 13.5 million MT, 28,390 million fingerling and 202.3 lakhs ton of feed will be required annually. To ensure availability and access to good quality seed, during the course of implementing PMMSY, 9 sanctioned brood banks will be established while evaluations are ongoing for establishing more units through cluster-based approach across the country. Additionally, to mitigate the risk of monocropping, species diversification and shifting carp-based culture to scampi, pangasius, tilapia and murrels based production is being promoted. The Department targets to make further sanctions to achieve expansion of 8100 Ha each of new rearing pond, new grow-out pond area and inputs for freshwater aquaculture supplemented by increasing technology infusion and adoption of good aquaculture practices. Such strategic investments will boost overall productivity from 3 Ton/Ha to 5 Ton/Ha as per the PMMSY targets.

Brackish/Saline water aquaculture has gained a great momentum in India. India’s export growth story is primarily due to the success of brackish water aquaculture of shrimp. The last few decades have witnessed significant growth in brackish water shrimp aquaculture; production of farmed shrimp has risen from ~20 MT in 1970 to 7.47 lakh MT in 2020, thereby contributing to major export share of the INR 46,662 crores fisheries export earnings.

Brackish water aquaculture offers huge potential as the country has around 1.42 million Ha of brackish/saline area, of which only ~13% is utilized. With the aim to harness its potential, the Department has focused on increasing current fish production of 0.7 million MT to 1.10 million MT by FY 2024-25. With a goal to achieve a production of 15 lakh MT, total of 45 thousand Ha of brackish water area will be incorporated by FY2024-25 boosting current productivity from ~4 ton/Ha to 8 ton/Ha. This will entail utilization of 3.9 million Ha of estuaries and 0.5 million Ha coastal mangrove areas available in the country for both finfish and shellfish culture. Owing to the high tidal amplitude, the Department has identified Gujarat and Odisha as higher potential states for brackish water aquaculture and plans to boost the brackish water aquaculture area in the states.

Additionally, Saline water aquaculture is being promoted to transform ‘Waste land to Wet-lands’ by increasing aquaculture area from 13 thousand Ha to 58 thousand Ha by FY2024-25. This is to boost the current annual production of 4331 ton to 1.04 lakh ton while boosting current productivity from ~6 ton/Ha to 8 ton/Ha States of Haryana, Punjab, Rajasthan and Uttar Pradesh that have high soil salinity are thus being promoted. In FY20-21. an investment of Rs 3,024 lakhs was done for following sanctions in four inland States including Maharashtra:

At present, shrimp farming has been promoted in 493 Ha area in Haryana with a production of ~3,120 ton with an average productivity of 6.32 ton/Ha. Action plan for Haryana and other states has been formulated to bring in more saline affected area under aquaculture for increasing production and thus productivity.Through engagement with ICAR-CIBA, the Department along with the States/UTs is also exploring sustainable ways for species diversification in brackish water aquaculture by promoting shrimps, oysters, mussels, crabs, lobsters, sea bass, groupers, mullets, milk fish, cobia, silver pompano to be cultivated.

India is bestowed with vast and varied cold water resources with valuable indigenous fish germ plasm and pristine water with a range of thermal regimes. Hence the Himalayan states offer a unique value proposition in Cold Water Fisheries. With the aim to harness its potential, the Department has focused on increasing current cold water fish production of 52,084 MT to 90 thousand MT by FY 2024-25 boosting current productivity from ~1 ton/Ha to 3 ton/Ha. It is estimated that to achieve the goal, 18.6 lakh fingerling and 5.16 lakhs MT of feed will be required during the course of implementation of PMMSY. Cold water fisheries have also been instrumental in creating 40 thousand employment opportunities and targets at doubling the engagement across the focus States/UTs.

Additionally, cold water fisheries are being promoted as a niche market by promotion of omega-packed trouts in all Himalayan States/UTs by targeting 10 thousand MT of Trout production. An investment of Rs 48.46 crores was made in FY 20-21 that entailed the following sanctions:

Ornamental fisheries has immense export potential, it is a multibillion industry spread across more than 125 countries with trade at retail level worth US $10 billion. For putting India in the forefront for ornamental fisheries, the Department is making efforts for holistic development of the sector through creation of ornamental fish clusters in selected inland and marine areas. Focus is also being given on promoting public private partnerships for establishment of various fish production units to make the sector vibrant and remunerative.

The scheme has already started demonstrating tangible benefits by adopting a participatory approach. In line with that, following sanctions were made for an investment of Rs. 15.3 crores in FY 20-21:

Reservoirs are generally referred to as ‘sleeping giants’ as in spite of large area covered it cage culture contributes to ~3.81% of the total inland fish production. Hence the Department aims at harnessing the potentiality of 3.54 million Ha of reservoirs under PMMSY. Many measures have been taken for promotion of cage culture in reservoirs in a sustainable manner for optimizing production through culture-based fisheries in small and medium reservoirs. With the aim to harness its potential, the Department has focused on increasing current fish production through cage culture of 2.44 lakh MT to 6.29 lakh MT by FY 2024-25 by tapping minimum 60% of the reservoirs and boosting productivity of all types of cages (small/medium and large). It is estimated that to achieve that goal, 750 crore fingerlings will be required annually.

The Department will focus on adapting an integrated approach for harnessing the potential of reservoirs through establishment of good post-harvest management, marketing linkages and other supporting infrastructure. Additionally, high fish yield is being achieved by enhancement in stocking density, quality feed, improved disease management and specie diversification to Pangasius, Tilapia, Minor/medium/exotic Carps.

To ensure the ambitious targets of PMMSY for cage culture in reservoirs during the course of implementing PMMSY, 20 thousand cages will be installed across 22 Sates/UTs, supplemented by reservoirs pen culture in 72.7 Ha and capture fisheries through enhanced stocking.

India is bestowed with 14 major, 44 medium, and numerous minor rivers that run through 2.52 lakh Kms contributes to current production of 1 Lakh ton. For optimally harnessing the potential of riverine fisheries, the Department is focusing on conservation of indigenous fisheries resources and restoration of natural productivity by practice of river ranching and 41 Conservation and Awareness in Riverine Fisheries programme sanctioned under Blue Revolution in 9 States /UTs.

Production of native species in the rivers by seed ranching of native stock, upgradation of riverine landing centers and instruments to provide financial assistance for fishermen wellbeing are being targeted. Planning is also ongoing for implementing river ranching, as a pilot-based activity under central sector scheme, in six states in two phases with total budget outlay of Rs. 2.81 crores to ranch 1.40 crores fingerling. The first phase will be launched by end of September while the second phase will begin in October. To support the fishermen, the Department has sanctioned the following with an investment of Rs 1,710 crores:

It is thus essential to note that with increased focus on enhancing production through these natural resources equal emphasis should also be given to take up sustainable fishing practices by traditional fishermen in the inland states.

The natural wetlands of the country are being developed by keeping ecological integrity of important natural wetlands through promotion of sustainable fishing practices thus contributing to the current production of 2.03 lakh ton through 5.5. lakh Ha available area. For optimally harnessing the potential of natural wetlands, the Department is targeting at a production of 5.61 lakh ton. It is estimated that to achieve the production target, 11 billion fingerling and 8.41 lakh ton of feed will be annually required.

States like Bihar, UP, Assam and Manipur are being focussed upon and efforts are ongoing to enhance production, diversification of species and ensuring that the connectivity between natural wetlands and rivers is restored as a good health indicator.

To further strengthen and catalyse inland fisheries’ potential in an efficient and effective manner many other supporting areas are being strengthened under PMMSY such as setting up Matsya Seva Kendras - One-Stop Shop extension centres run by local beneficiaries to serve the fishers and fish farmers for all their fisheries needs, aquatic animal health management - 2 Aquatic Referral Laboratories in Bihar, 1 Disease Diagnostic Laboratory in Delhi and 4 Disease Diagnostic and Quality Testing Mobile Laboratories in Uttar Pradesh along with numerous fish kiosks, ice plant/cold storages, fish feed mill/plants, fish transportation facilities, enterprise units have been sanctioned. Additionally,many community outreach activities such as training programs, World Fisheries Day, fish festivals etc have been organised by NFDB in collaboration with the States/UTs, ICAR fisheries Institutes